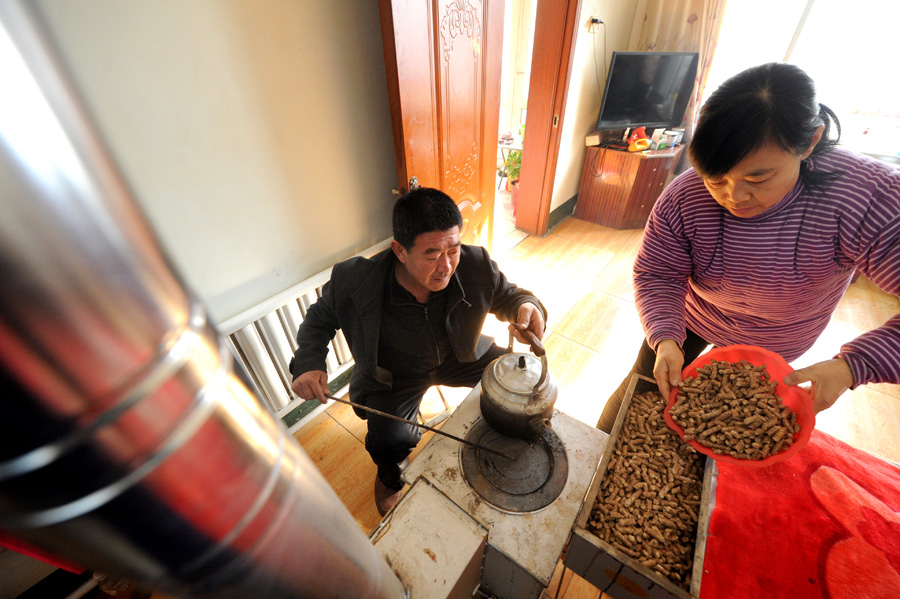 Bioenergy is growing exponentially in China, thanks to support from government policies, industry insiders said.

For instance, for the first time this year, villagers of Lifang village in Changzhi city in Shanxi province are able to keep their home warm, cozy and clean in the long and chilly winter, thanks to a newly installed biomass central heating system. In the past, they mainly relied on burning coal for heating in winter, which polluted homes and increased expenditure. The city has promoted central biomass heating in five villages since last year, covering more than 3,550 households with a heating area of over 385,000 square meters, according to a report in China News. That is just an example of the bioenergy expansion in China, driven by the country’s far-reaching environment protection.

Bioenergy, usually made from agricultural and forestry byproducts and animal waste, is often considered carbon-neutral, and Chinese authorities have been promoting its development in recent years with accelerated efforts.

Adam Brown, senior analyst with the Renewable Energy Division of the International Energy Agency, said he was “impressed by the pace and scale of how bioenergy is developing in China”. “China has become the largest producer globally of electricity from bioenergy, and with major new initiatives across heat, electricity and transport, the country is anticipated to provide almost a fifth of global bioenergy growth by 2023,” he said. That is to say, China will account for the largest absolute bioenergy growth over the forecast period, surpassing the European Union, a global bioenergy leader.

Yuan Baorong, deputy director-general of CECEP Consulting Co Ltd, said that in 2003, installed electricity capacity from bioenergy was only 1.5 million kilowatts in China, which had increased 10 times to about 15 million kW by the end of 2017.

The use of biomass as a source for boiler heating is also picking up in China, as the total biomass consumption for heating in 2017 was about 13.2 million metric tons, covering heating areas of 80 million square meters.

The government has issued a series of policies supportive of the development of bioenergy, especially in promoting industrial and consumer biogas use, and utilization of biomass heating in North China, she said. On Dec 7, a notice issued by the National Energy Administration called on the provincial energy authorities and nine major Stateowned energy enterprises to make medium to long-term plans so that biogas can be better developed to help make the energy mix environmentally friendly.

The notice required the authorities and enterprises to incorporate biogas in their overall energy development strategies, such as including biogas in the natural gas production, supply and marketing system, and supporting the establishment of a raw material collection system for biogas.

Early this year, the National Development and Reform Commission and the NEA jointly issued a plan to replace 30 million tons of coal in the energy mix with bioenergy by 2020, and 60 million tons by 2035.

According to the plan, the installed capacity of cogeneration of electricity and heat from bioenergy will exceed 12 million kW, and the total heating capacity of bioenergy will cover about 1 billion square meters by 2020. The two numbers will respectively increase to 25 million kW and 2 billion sq m by 2035. Xiong Jian, president of Optic Valley Bluefire, a Wuhan, Hubei province-based company engaged in the biomass heating sector, said surging demand in China gives the company much hope that the future will be bright. Established in 2005 mainly on biogas utilization, the company’s business has expanded into the whole bioenergy value chain, including biomass collection and processing, equipment manufacturing, and industrial park biomass heating system design and construction. With ongoing projects in 10 provinces, the company has more than 200 intellectual property rights and 60 invention patents.

It also has won awards at home and abroad for technology innovation and environment protection contribution, and recently established joint ventures with Danish bioenergy boiler company Justsen Energiteknik in Copenhagen and Wuhan. As the Chinese economy develops, energy demand for heating not only increases on the consumer side but also surges in the industrial sector, especially in the food and beverage, pharmaceutical, chemistry and textiles segments, he said. Bioenergy companies have been established across the country to meet such demand.

However, there are also obstacles curbing the fast development of bioenergy in China, including the inefficient circulation system of biogas, especially compared against natural gas, and the urgent need for domestically developed technologies and equipment that are more suitable for Chinese users, said Yuan, who doubles as an energy policy consultant for the authorities concerned. She said removing such obstacles will unleash greater potential for bioenergy in China.