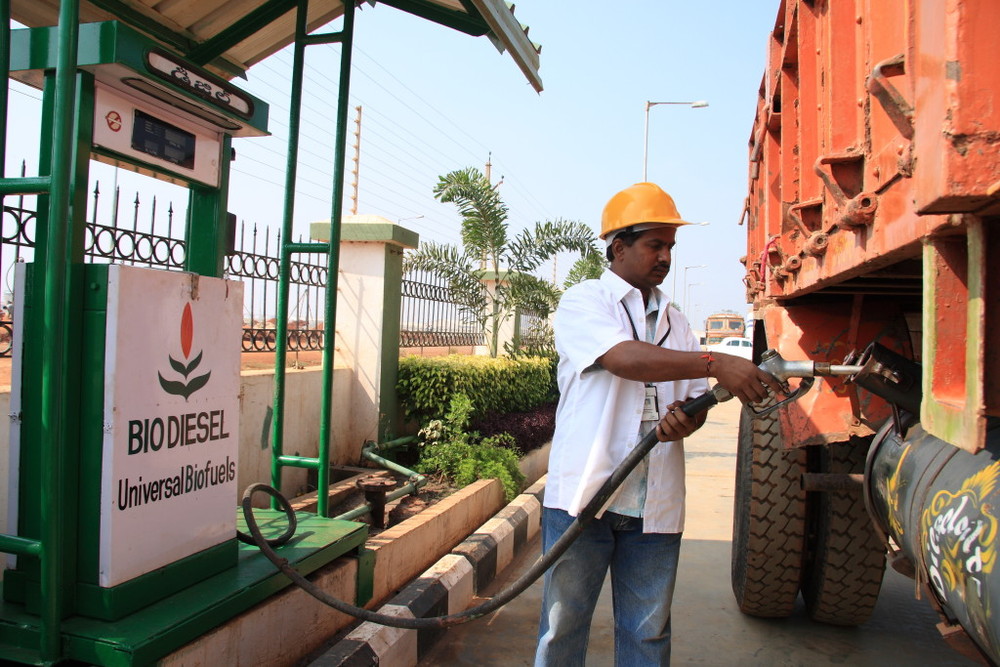 US-headed advanced biofuels producer and technology developer Aemetis, Inc., has announced that its Universal Biofuels India subsidiary has been awarded a biodiesel supply contract with the three India government-owned Oil Marketing Companies (OMCs) in a public tender process. The contract provides for ongoing deliveries of biodiesel to a variety of blending locations in an aggregate amount of more than US$23 million during 2019. Biodiesel shipments are scheduled to begin this month.

According to a statement, the total diesel market in India is approximately 25 billion (US) gallons (≈ 94.6 billion lites) per annum with 80 percent imported, of which less than 250 million gallons (≈ 946.2 million litres) per annum of biodiesel is currently blended.

The 2018 National Biofuels Policy stated a plan to increase biodiesel blending to 5 percent of the diesel market, equal to more than 1.2 billion gallons (4.54 billion litres) annually. The OMC’s in India supply about 70 percent of the fuel consumed in India, and the diesel fuel market has been growing at a rate of more than 5 percent annually.

“With the recent completion of our plant pretreatment unit and expansion to 50 million gallons of capacity per year from low cost, high free fatty acid feedstock, the Aemetis team in India is executing on a rapid increase in production and revenues this year by broadening our customers to include government, logistics, mining, retail fuel stations and other sectors. As the only US company producing biofuels in India, Aemetis built and has now fully upgraded our India biodiesel and refined glycerin plant to use low-cost feedstocks as a leader in this rapidly expanding market, stated Eric McAfee, Chairman, and CEO of Aemetis”

Aemetis, Inc. announced on January that its Universal Biofuels subsidiary has completed a two-year upgrade of the Kakinada, India biodiesel and glycerin plant. The upgrades to the Kakinada plant included installation of a pre-treatment unit to process lower-cost and waste feedstock into oil; expansion of boiler and other utility capacities; and implementation of environmental systems to enable full production of 50 million gallons per year of biodiesel and bio-oil while simultaneously operating the biodiesel, pretreatment and glycerin refining units.

The 2018 India National Policy on Biofuels issued by the Indian Government increased the target for domestic biodiesel consumption to 5% of the approximately 25 billion gallons of petroleum diesel consumed in India each year from currently less than a 1% biodiesel blend. In mid-2018, the Goods & Services Tax on biodiesel was reduced from 18% to 12% to support expansion of biodiesel. In late 2018, the India Supreme Court determined that biodiesel may be sold at retail fueling stations, significantly expanding the market for biodiesel in India. The India government has recently issued a purchase requisition for approximately 260 million gallons of biodiesel for year 2019 to be supplied by domestic India biodiesel producers.

“The Aemetis team in India is executing on a rapid increase in production and revenues this year to meet growing domestic market demand for biofuels in a fast-growing economy,” stated Eric McAfee, Chairman and CEO of Aemetis. “As the only US company producing biofuels in India, Aemetis built and has now fully upgraded our India biodiesel and refined glycerin plant to use low cost feedstocks to become a leader in the rapidly expanding India biofuels market.”

“The innovative feedstock pre-treatment unit developed and installed at the Kakinada plant provides a sustainable cost advantage and produces lower carbon biofuels to supply the growing India domestic market for biodiesel and refined glycerin, as well as export markets,” stated Sanjeev Gupta, Managing Director of Universal Biofuels. “Expanding our steam and power requirements to enable the full operation of the new feedstock pretreatment unit along with our existing biodiesel and glycerin refining units required a substantial investment of time and specialized technical expertise. The entire plant is now capable of operating at 50 million gallons per year of biodiesel capacity using valuable lower cost, lower carbon and waste feedstocks.”

Aemetis will hold an investor conference call on Thursday, January 10 at 1 pm Pacific / 4 pm Eastern to review the recently-announced Aemetis Biomethane business, the India Biodiesel/Glycerin business and other updates.

Headquartered in Cupertino, California, Aemetis is an advanced renewable fuels and biochemicals company focused on the acquisition, development and commercialization of innovative technologies that replace traditional petroleum-based products by the conversion of ethanol and biodiesel plants into advanced biorefineries.  Founded in 2006, Aemetis owns and operates a 60 million gallon per year ethanol production facility in California’s Central Valley, near Modesto.  Aemetis also owns and operates a 50 million gallon per year renewable chemical and advanced fuel production facility on the East Coast of India producing high quality distilled biodiesel and refined glycerin for customers in India, the US and Europe.  Aemetis operates a research and development laboratory, and holds a portfolio of patents and related technology licenses for the production of renewable fuels and biochemicals.  For additional information about Aemetis, please visitwww.aemetis.com.